Like any other trend established by the authorities, socialist realism was an artificial creation. Although it was legally enforced just for a few years (1949-1956),  it was undoubtedly one of the most dramatic periods in the history of Polish cinema which became a propaganda outlet for Stalinism at that time.

Almost never did the films of socialist realism arouse emotions intended by the film-makers; rather than political and ideological commitment, the viewers felt indifference. The overall mechanism of how that cinema worked was easy: an artist was telling a hardly believable story pretending he believed in its authenticity and a viewer was watching the film pretending he found the story convincing. There was no room for real and deep reception experience. Protagonists in those movies were in fact different variants of the same character bearing a set of socialistic virtues and ideas, most of all the socialist work ethic, ideological vigilance and political commitment. Nowadays it can be found surprising how they were deprived of empathy and emotions and that actually new, different ways of thinking, acting and expressing their thoughts were created especially for them.

In the movie script for Kariera (The Career; directed by Jan Koecher, 1954), written by Kazimierz Sumerski and Tadeusz Konwicki, an imperialistic spy comes to Poland to try to build a network. He meets a chemical engineer who’s married to a young communist. The spy, however, knows the engineer’s secret – in 1946, right after leaving Oflag, he got involved with emigrants’ community for a short period of time which was considered reactionary. The spy starts blackmailing him. The engineer, certain that there is no other way to rescue himself, decides to confess the long-hidden truth about his past to his wife. Her reaction is a strong example of how the new value system worked. The wife makes her husband visit local Public Security Office (UB) and plead guilty, although she knows that this way she’s virtually sentencing him to a few years of prison and that their marriage is probably not going to stand the test. Love is meaningless from now on, in wife’s opinion engineer’s blame automatically results in ending their relationship, what’s more – it undermines his present, valuable achievements for the Polish People’s Republic. Interestingly enough, in short film Kurtyna (The Curtain, 1954) based on some parts of the script, Wadim Berestowski shot that scene exactly the same, however in his feature film Jan Koecher made it a little bit less dramatic: the wife doesn’t stick her nose into her husband’s business. It was symptomatic of that specific coldness which characterized many relationships watched on screen at the time.

It appears that the socialist film-makers (not only directors and screenwriters but also the whole board of the office workers putting every movie under the microscope) wouldn’t have showed love at all, if only possible. Such attempts were even undertaken. In Załoga (The Crew; 1951) by Jan Fethke the students of a navy school make an enclave – they study and grow up… but only ideologically, not one of them seems to know that opposite sex exists. Since love means spontaneity, being lost in one person and cutting oneself off from the world. It was no more, no less but a manifestation of freedom and personality, therefore a risky topic. At the same time it was too attractive of a motif for a viewer to get rid of it completely – like in Załoga. It had to be tamed, made into a catalyst of political struggle.

When Jan Rybkowski first started shooting his film entitled Dom na pustkowiu (The Lonely House; 1949) based on a story by Jarosław Iwaszkiewicz, it was a humble tale about two people in love in the time of war. He’s a Home Army soldier looking for a shelter after somebody ratted on him, she’s a young girl prone to make sacrifices. 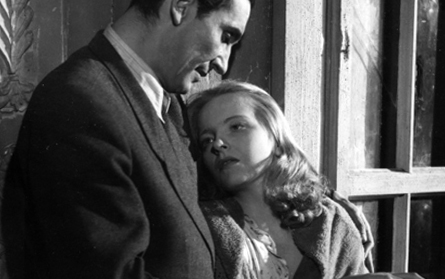 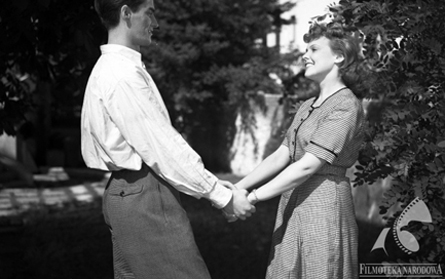 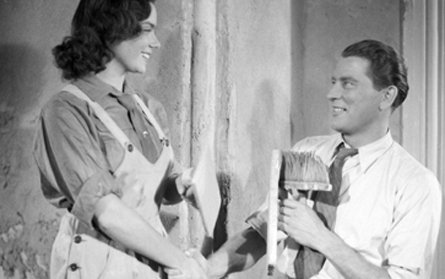 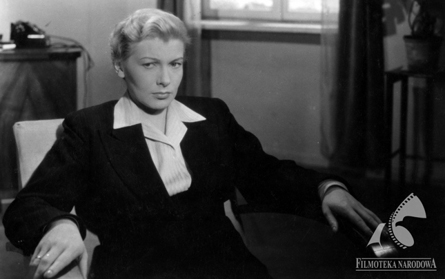 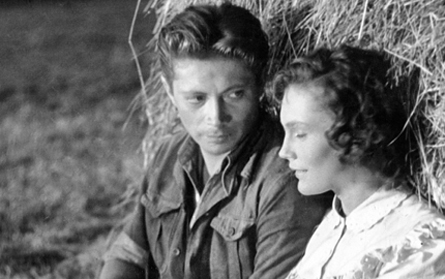 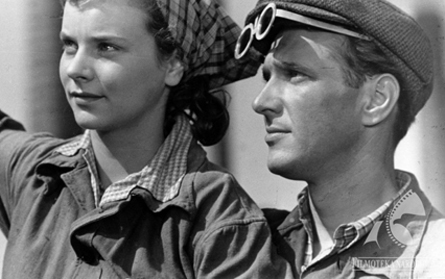 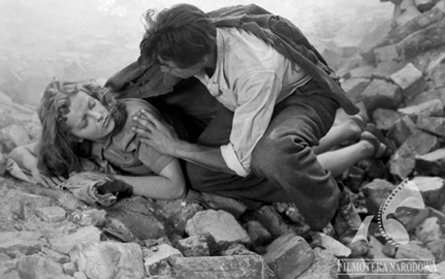 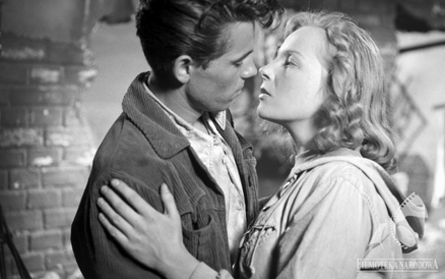 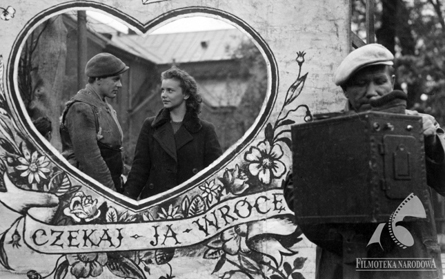 Their love grows stronger and lasts, despite all the tragedies around. It takes the outbreak of the Warsaw Uprising to separate them and the men dies. Rybkowski made a film compatible with Iwaszkiewicz’s idea. It was even shown at the festival in Venice in 1949 but in Poland the cinematography authorities instructed him to thoroughly alter the movie. As a result, the man becomes a fighter of socialist organisation who, in the meantime, is in love with a girl. What mostly brings them together is a fight for the cause and listening together to the first reading of The Manifesto of the Polish Committee of National Liberation (PKWN) which becomes – as hard to believe as it is – a substitute for ecstasy and satisfaction.

What about after the war? In Adventure at Mariensztat (directed by Leonard Buczkowski, 1953) secretary Tokarski kind-heartedly says that ‘love is a kind of private initiative which perfectly suits the economic planning’; but in reality hugs, kisses, amorous looks or flirting on the screen had to give way to short and emotionless handshakes that can be seen even in Adventure at Mariensztat. At the same time it was clearly sending a message that a woman and a man had above all the same rights and responsibilities in that new reality; to some extend sex didn’t matter anymore.

However one cannot help felling that comrade Wala from Żołnierz zwycięstwa (Soldier of Victory, directed by Wanda Jakubowska, 1953) experiences torments every time she gets near legendary general Świerczewski. Świerczewski is virtually a god to her so Wala cannot allow herself to see a man in him. She can feel that urge though. It’s hard to believe that Wanda Jakubowska’s intention was to suggest some erotic subtone in that plot but that kind of suggestion is visible on the screen anyway. It was just impossible to cut everything out from the movie, eliminate or even dehumanize it. Nevertheless, for comrade Wala admitting she’s in love, even just to herself, would be equivalent to denying her own accomplishments as a communist.

Similar actions have been compared, especially nowadays, to some kind of suppression of sex drive. In socialist realism films close relationships between people were so rarely shown that a very romantic conversation from Pierwsze dni (First Days, directed by Jan Rybkowski, 1951) assumes the proportions of  sensation; two workers, a man and a woman, say that if they decided to be together for real, they would cross the same doorstep every evening. It’s a very unusual love confession showing some different, more human needs of the characters. What would be happening behind that door? It’s really hard to imagine…

Not even one of the socialist realism characters (maybe apart from the villains) seemed aware of an intimate sphere of life that a woman and a man share. And the fact that during that period it was better to leave some things off the screen is not to blame. That part of  life simply didn’t exist, it was said to be suppressed. A naked woman’s breast could only belong to brave goddess Nike and couldn’t have been the subject of men’s desire. In socialist realism movies it appeared just once – when a gendarme rips off the shirt of a French female worker (played by Hanna Skarżanka) during the parade in Young Chopin (1951) by Aleksander Ford. However the viewers saw what they wanted to anyway – just a bare breast. It was said that young boys visited cinema only to watch that scene and when it was over, the rumble of them leaving their seats could be heard. In Young Chopin the great composer falls in love with Konstancja Gładkowska; as even in socialist realism films, although it’s not easy, two people do fall in love sometimes, the viewers start asking themselves one question: ‘will they ever kiss each other?’. It doesn’t happen in Young Chopin though.

Młodość Chopina
Loading the player ...
muzyczny, historyczny, biograficzny, kostiumowy
Polska
1951
Release Date: 1952-03-14
Director: Aleksander Ford
Screenwriter: Aleksander Ford
Director of Photography: Jaroslav Tuzar
Tags: kompozytor, fortepian, Powstanie Listopadowe
Probably Stanisław Różewicz was the first one to show a kiss in Trudna miłość (Difficult Love, 1953) – a progressive farmer, member of agricultural cooperative, kisses kulak’s daughter who’s just freed herself from her father’s power. The kiss was shown in all its glory and all the melodramatic tricks were supposed to breathe life into the boring pattern. Supposedly Różewicz asked the actors not to wallow in hay too much though… Trudna miłość was released in April 1954 and one daring scene was not enough to stop the attack of the critics, who at that time were allowed to express their thoughts a bit more honestly, even those concerning socialist realism. The film didn’t bring about more such scenes in Polish films of that period. Timid kiss is only shown in Niedaleko Warszawy (Not Far from Warsaw, 1954) by Maria Kaniewska when steelworker proposes to his female colleague.

Suppressed sex drive had to move to another sphere and it did burst returning double-barreled. Superproduction was the field which gave vent to the instincts which nowadays are often presented in sexual context of male-female competition, the will to be liked or to dominate. Wiesław Godzic in his famous essay Film i psychoanaliza: problem widza (Cracow 1991:  120-128) proves that Adventure at Mariensztat by Buczkowski was built not only on the rule of suppression of sex drive but also on the main character’s, Hanka Ruczajówna, search of sexual identity. Exactly the same can be said about Wanda Bugajówna from Niedaleko Warszawy or about Krystyna Poradzka from the movie entitled The Bus Leaves at 6.20 (directed by Jan Rybkowski, 1954).

Women would get on tractors, they would weld, grab trowels and, truth to be told, they were depriving themselves of their womanhood for society’s good. As a result, socialist realism became more and more masculinized. Were those women still attractive according to men? Yes, but mainly because wise protagonists of socialist realism cinema had no one else to fall in love with. Nevertheless, one can easily reverse the question and ask: how could a man impress a woman back then when she was often more skillful and intelligent than he was?

Almost in every socialist realism film, there was a dance scene, some country knees-up or ball for working people. Protagonists of Dwie brygady (Two Brigades, directed by a collective, 1950) or Niedaleko Warszawy are dancing to folk music. That is virtually the only moment when film-makers left the characters some freedom: the woman and the man, the girl and the boy take off their socialist realism masks, they do not play, they are real. But they have to change their attitude right after the dance. Rivalry and competition at work between women and men were a substitute for erotic tension and it would start the following mechanism: the more we compete, the more attractive we become for each other. But that was a vicious circle since rivalry would become so important that there was no time left for love. It was something that had to wait until later.

Actually Aleksander Ford was the first one to start changing the socialist realism image of love. In Five Boys from Barska Street (1953) he shows a group of  young rascals who are trying to figure out what to do after war. At the building site of East-West route, one of the boys, Kazek Spokorny, meets Hanka. Ford presented their love being born with finesse and kindness. At first they try not to show they’re shy, they take every opportunity to get closer to each other and then, when they already know each other quite well, they want to look after each other in a way. Because of that as well as the fact that the ending is not exactly a happy one, Five Boys from Barska Street did not fit the pattern.
Two years later, there were shot two films which gave up socialist realism completely: A Generation (1954) by Andrzej Wajda and Hours of Hope (1955) by Jan Rybkowski.
In A Generation, Stach who’s in love is daydreaming about a girl: ‘Dorota… It would be nice to stroke her hair’. It was the first time when an authentic feeling was shown on Polish screen.